Important news for us regarding safety!

For our Pipelayer Performer 980 we relied on Brigade Elettronica, leader for over 40 years in vehicular safety systems. We installed its new Backsense Barrier Observation Radar System, which signals the presence of obstacles in a variable area between 3 and 30 meters in length and between 2 and 10 meters in width and acts as an anti-collision system.

We have decided to install two, one front and one rear, both in the top version of the programmable range, which also allows you to exclude fixed objects or bodywork parts. 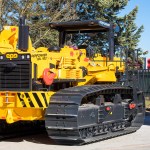 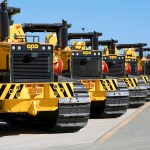 The sensor is solid, resistant to vibration and high/low temperatures as well as waterproof and resistant to smoke, sand, dust and mud; it connects to a display housed in the cabin, which  is easy to read, with five LEDS corresponding to the five zones around the vehicle, which allow you to immediately identify the part at risk of collision. The system also provides acoustic warning, with an adjustable buzzer of 65 to 90 dB, to be heard in noisy environments.

But this is just the beginning: the Performer 700, the lighter 70-ton version, will be ready soon and, to further enhance the safety and visibility aspect, on the prototype we are testing the 360-degree vision system of Brigade Elettronica, called “Backeye 360 Select”. It consists of four cameras that, thanks to an intelligent software, reproduce each of the footage in the monitor, bringing them together in a single image with a view from the top of the machine, resetting the blind angles.